Your page? Unpause your account to remove this banner.

Overwhelmed By Photoshop?
Let Woody and Chris be your GUIDE to Photoshop!
Helping you become the Photoshop Master
You've Always Dreamed of Being!
Now the Next 50 People Can Join Practically RISK FREE.
Join for $37 & Get a $37 gift card!
TEXTURE EFFECTS for Killer Sports Composites.
Item
Price
37.00
297.00 (REG $497)
Your order has been declined. Please double check your Credit Card Details or contact support for information.
Credit Card Number:
CVC Code:
Expiry Month:
Expiry Year:

ONE TIME SECRET OFFER: 142 Downloadable Lessons with Lifetime Access for around $2/Lesson

STUDENT SPOTLIGHT: DEBORAH SIE
I have grown so much through being in the Woody Walters Exclusive Group with Woody Walters and Chris Wooley. These two guys are amazing teachers. It makes a huge difference to be in a group like this where you get personal attention, your work critiqued and new technique challenges. And I learn a lot from fellow group members! The new Photoshop by request to assist with challenges and interests has been amazing. Hunting down how to do things on the net can be helpful but often find I things are left out leaving me frustrated. It is easy for me to get scattered in many directions. Being in this group helps me to focus, get anchored and make progress. This has been an excellent investment! 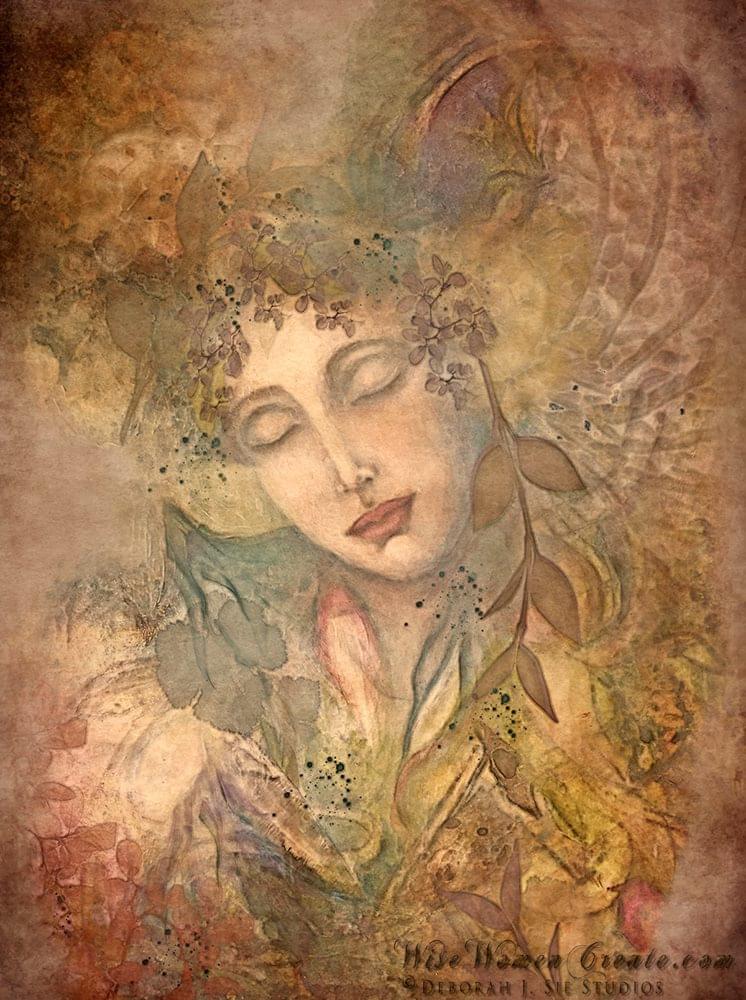 This Could Be YOU!  Watch this video to see what our students have created this year guided by our teachings in the EXCLUSIVE GROUP.
We know what you are afraid of.  Wasting Time and Money.
That is why we have made it practically risk free.
You can join for only $37 and test drive EVERYTHING.
And if you decide it's not for you, you can cancel and keep everything that you have downloaded.  No questions asked.  No Hard Feelings.
MEMBERSHIP INCLUDES:
​​​​Access to 2 GROUPS! Membership to the EXCLUSIVE GROUP And to Photoshop 101
Access to the Downloadable Texture Library to Use on Any Project!
Members Only How to Videos in the Secret Facebook Group that walk you through how to add fire, lightning, floral, powder, shattered, and other dynamic special effects to your photos to set you apart.
15 Minute Makeover (A 15 Minute or Less Photoshop Technique) every month.
Woody's World (An Hour Long Tutorial, One Technique From Start to Finish) every 8 weeks.​​​​
CANCEL ANYTIME AND KEEP EVERYTHING YOU DOWNLOADED. IT'S A NO-BRAINER!
PLUS ALL THESE BONUSES!
BONUS #1 $99
Smoke Volume 2 Brushes  FREE! 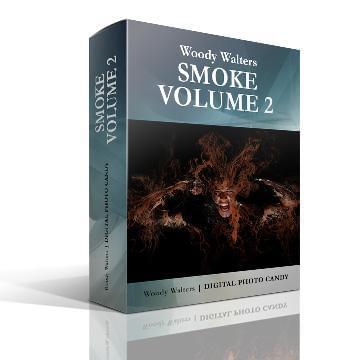 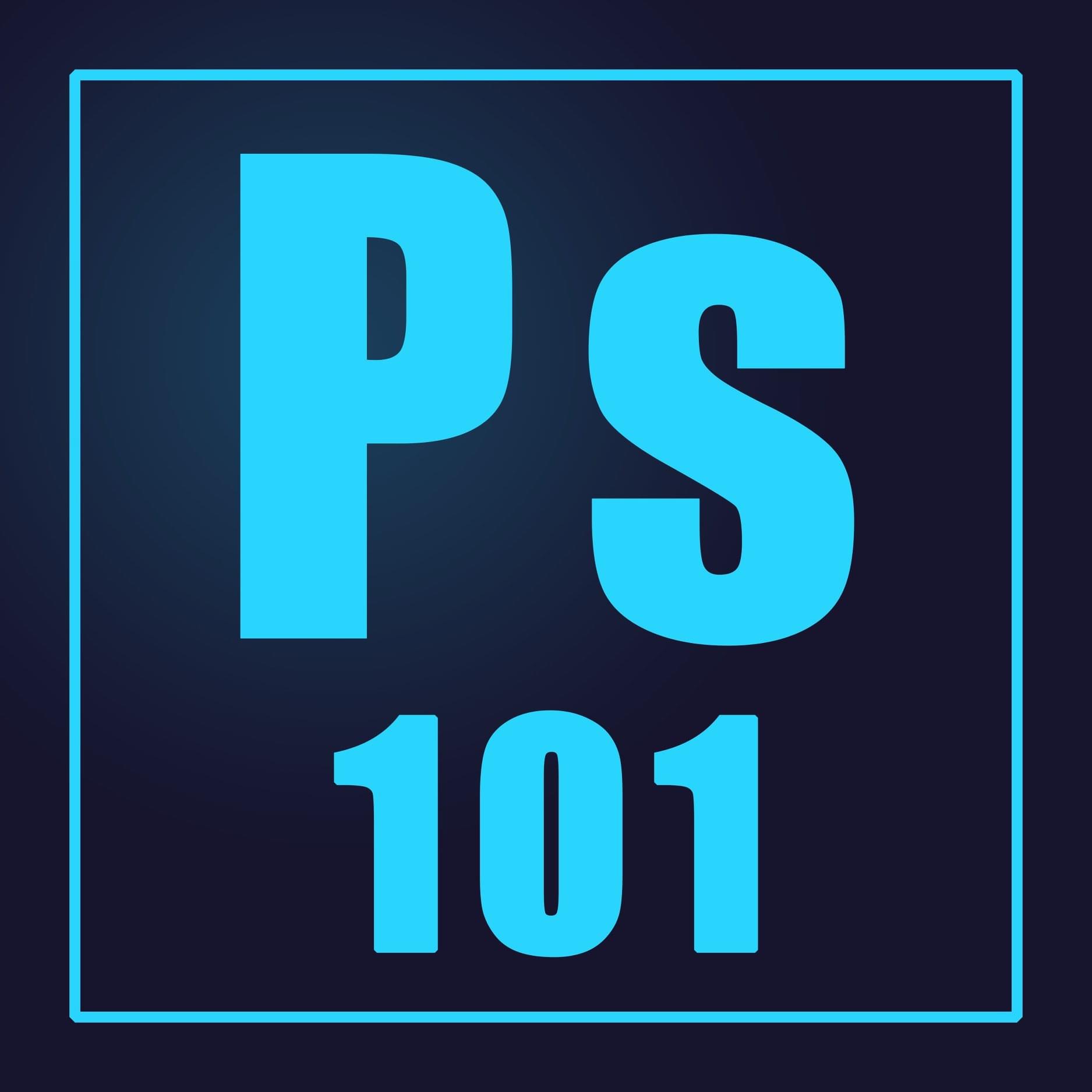 BONUS #3
How to Videos that Show You These TECHNIQUES $495 Value FREE!
BONUS #4
Photoshop By Request $295 Value FREE!
YOU guide what you want to learn and Chris Creates a Video!
Student Driven Learning! 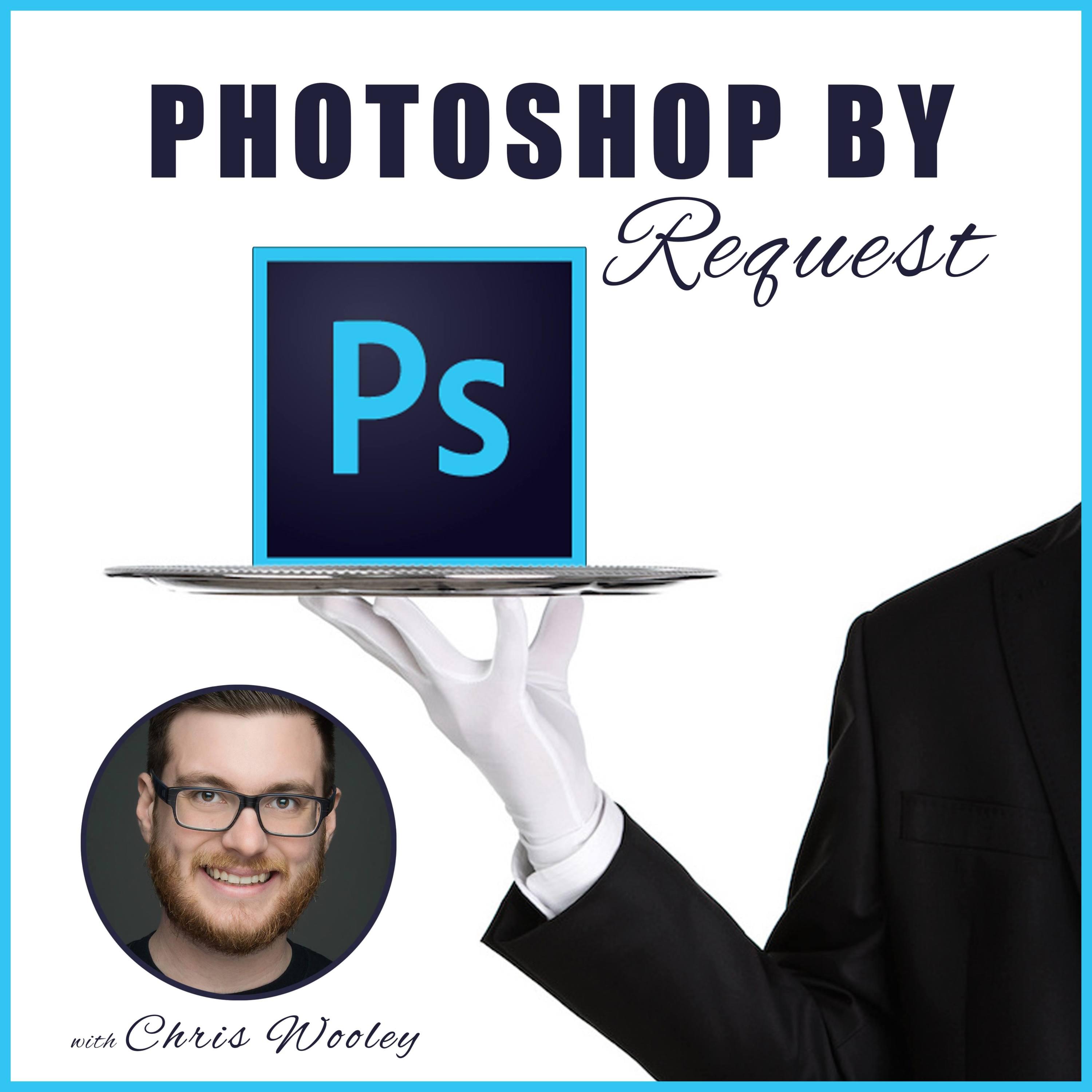 BONUS #5  ($195 Value)  FREE!
Weekly Video Critiques of YOUR Photos with Actionable Steps to Make Them Better. 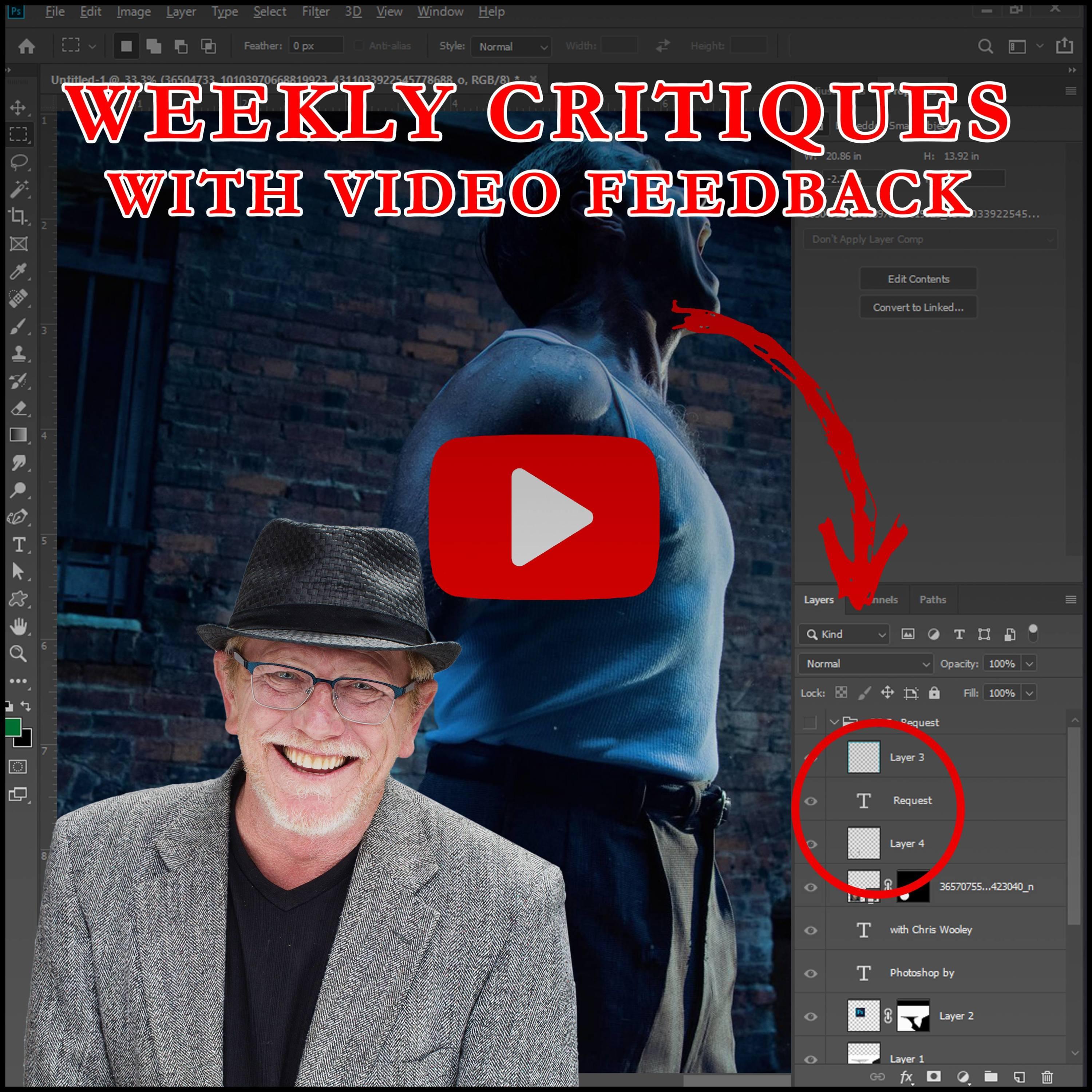 BONUS #7  FREE!
50% Discount on ALL Downloads in the Photoshop Tools Store 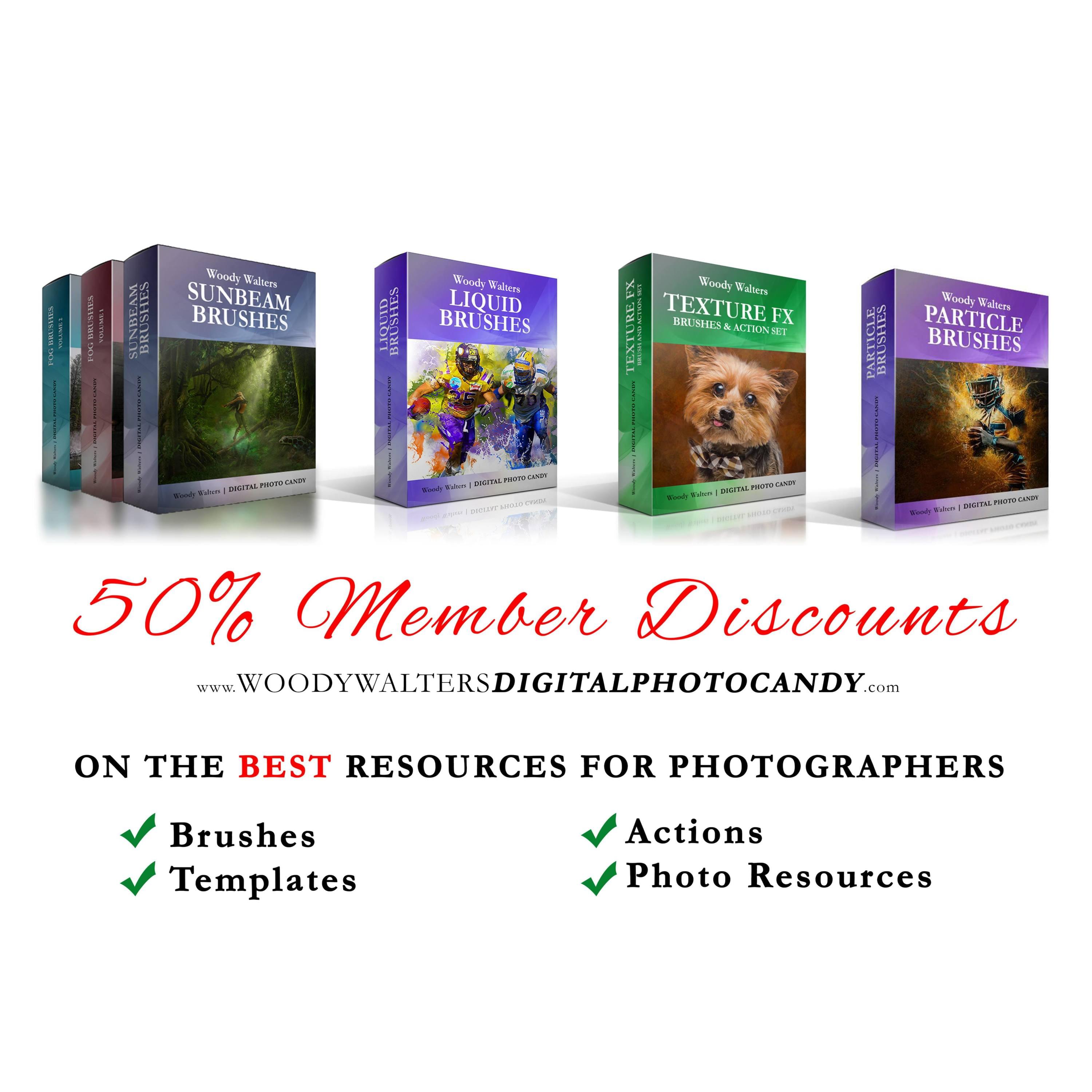 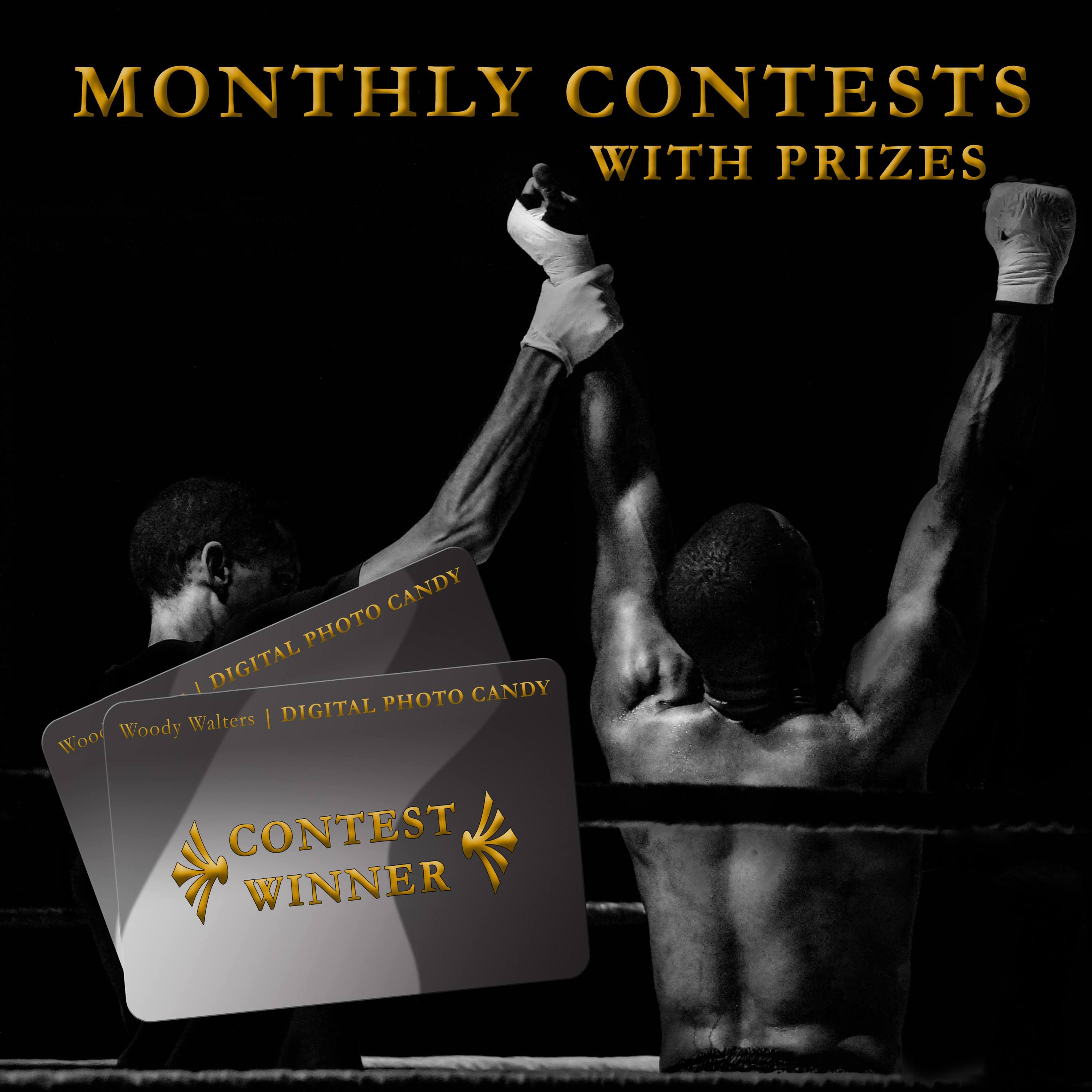 BONUS #9  ($129 Value)  FREE!
Texture Library to Use And Download for any Project 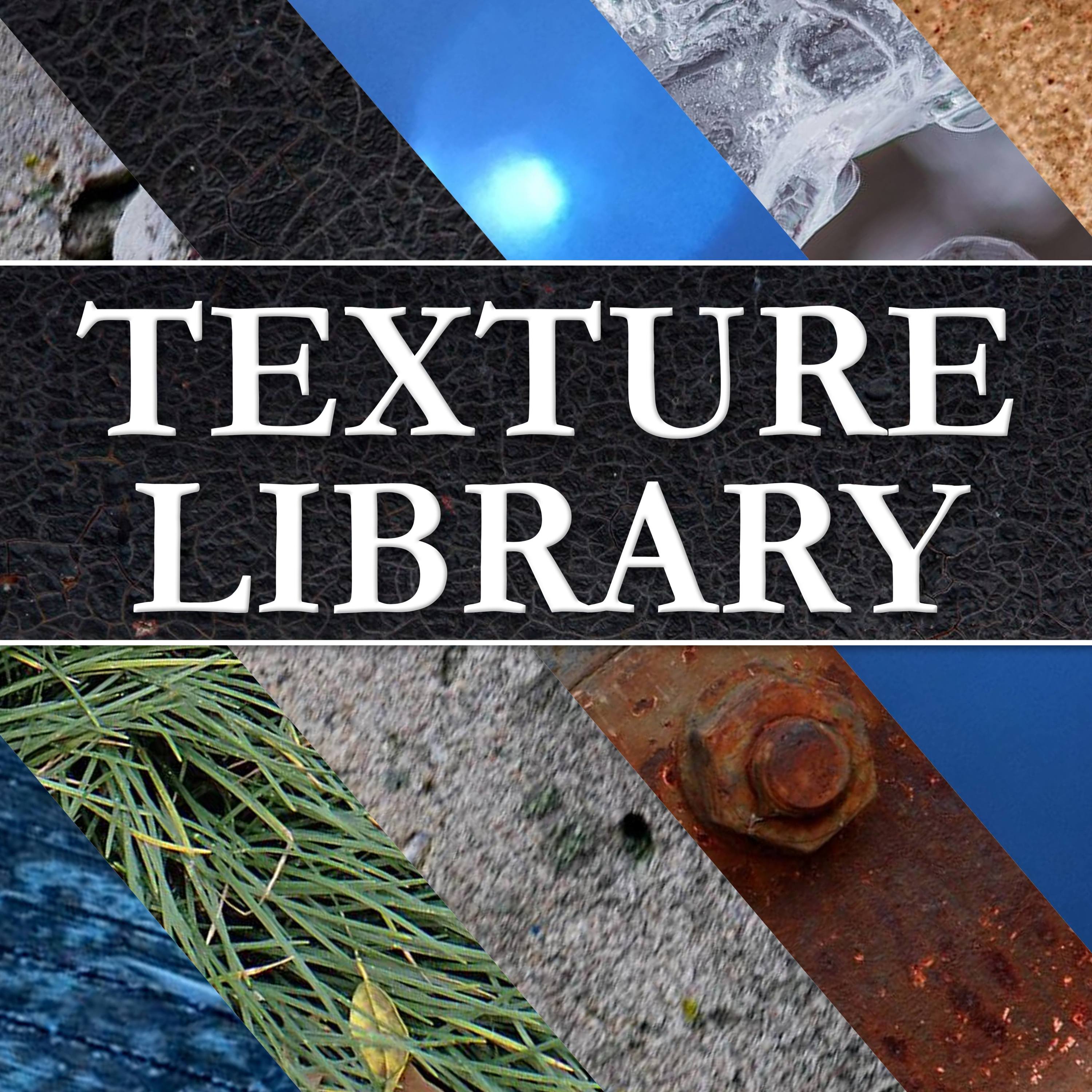 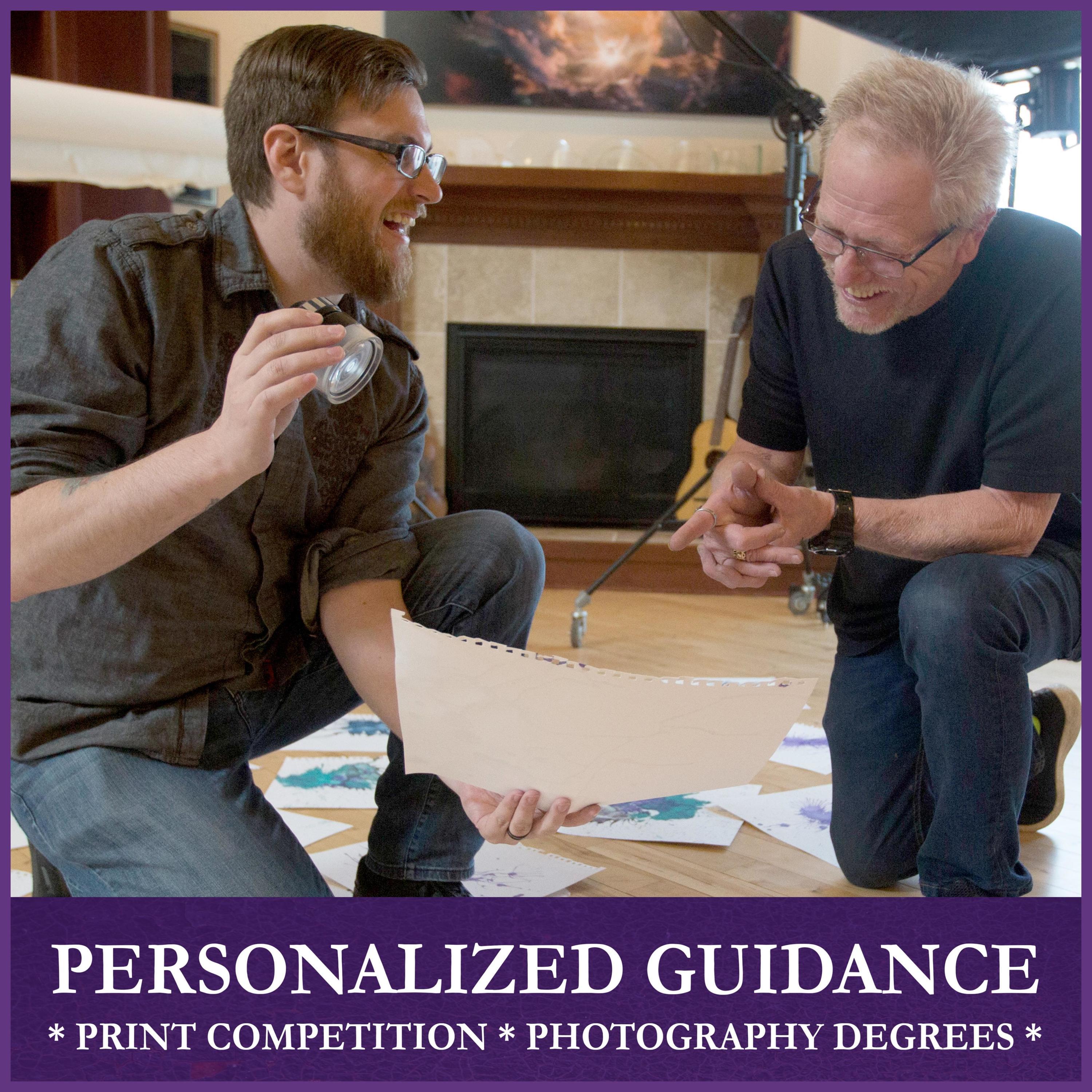 Over $1000 in Educational Videos, Resources and Downloads
for only $37/month.
Meet Your Teachers
Woody Walters  And Chris Wooley 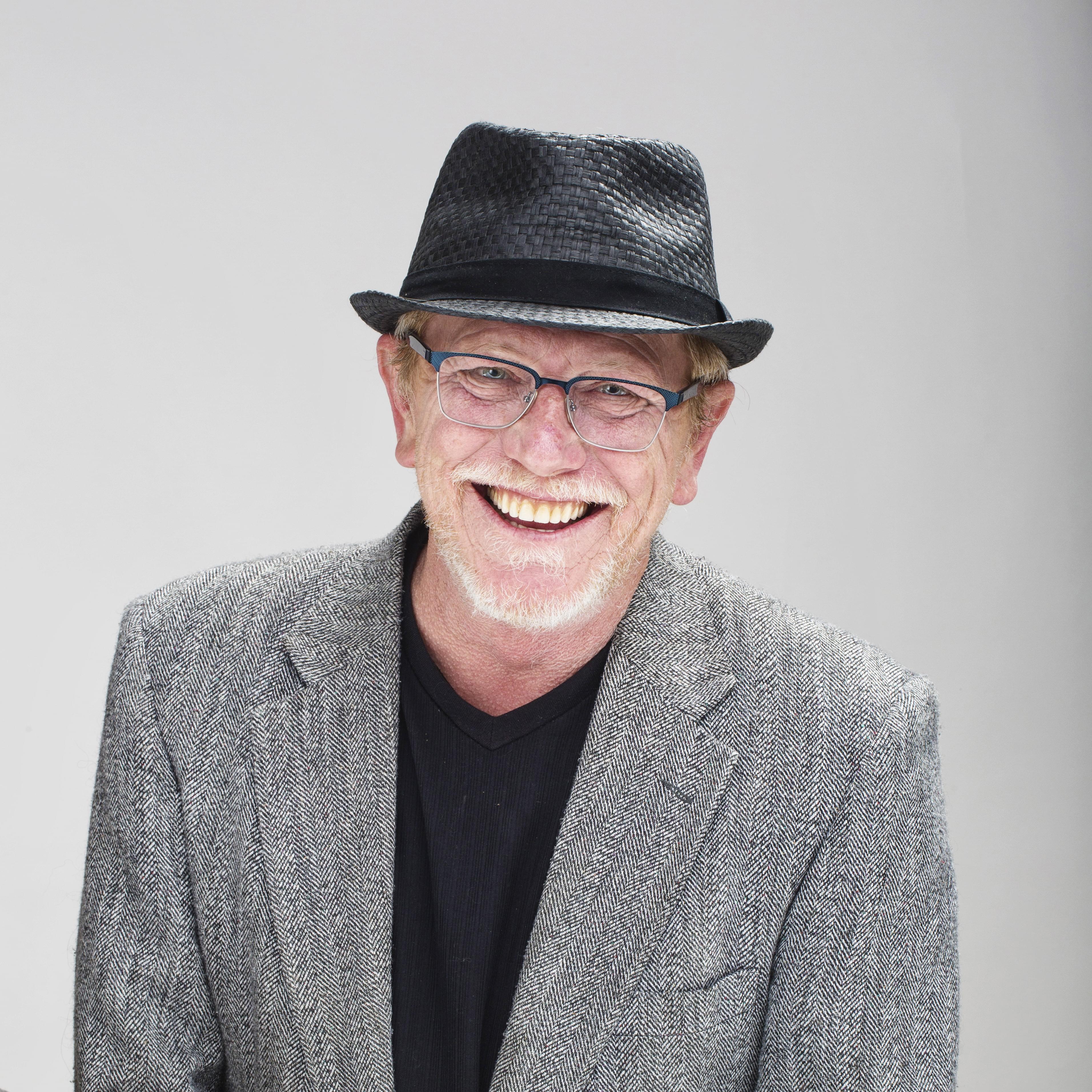 Woody Walters
Master Photographer, Craftsman Photographer
Woody Walters has become one of the nation’s premier artists. Walters’ photographs are a celebration of renewal and change. In his latest portfolio “Reflections of Christ,” Walters has pushed the boundary of photography to new and exciting limits allowing him to give a visual testimony in strikingly complex imagery. During a career that spans decades, Walters evolved from a commercial photographer and fine art black and white landscapes artist, to one of the newest Christian artists. His commercial client list included Walt Disney World, Blockbuster Video, Ilford Photo, Mamiya Camera, Calumet, and Burger King.
His black and white landscapes are reminiscent of Ansel Adams and depict the beauty of nature’s diversity. The portfolio ”Faces In Time” takes the viewer back to an age of Americana that is forever lost. One of the images from that portfolio, “Lill”, was purchased for donation to the Smithsonian. In 1994 his distinctive photographs of Florida were published by the University of Florida Press in a book entitled, “Visions of Florida.”
The reason for the inspiration for “Reflections of Christ” came from a very spiritual place within his heart. “After viewing the many negative portrayals of Christ that are found in art today, I felt compelled to take a positive approach to the depiction of Christ. With the experiments in combined imagery this work is now a reality.”
Through his diverse portfolio subjects, Walters’s work is sought after and appeals to a very wide audience. Walters’ works appear in museums and galleries throughout the world, including Ansel Adams private collection, the Smithsonian, the Tampa Museum of Art, the Yergeau-Musee International d’Art in Canada, the Milwaukee Art Museum, the Hoyt Institute of Art, the Pensacola Museum, the Madison Museum of Art, a private collection at the Vatican in Rome, and is featured in many international tours with the United States Embassy.
Walters has been in the top five photographer’s in Iowa eight times. He has also received the Top Heart of America Photographer five times, a record in the state of Iowa. He received his Masters and Craftsman Degrees from PPA in July 2003. Nineteen images were chosen for the prestigious loan collection and he received the coveted Medlar Award for the top portrait at the April 2000 affiliated competition. To date Walters has collected an astounding eight Kodak Gallery Awards and three Fuji Masterpiece Awards. He received three perfect scores in print competition for his images “My Ex Wife”, “Born in the USA, " and "Men of Freedom." He’s been published in the Professional Photographer Magazine, Photoshop User Magazine, and was a featured photographer
Walters teaches across the country offering photographic workshops for beginners to the very advanced. He taught advanced digital imaging at the college level for almost 7 years. Since 2009 he has been teaching photographers through his online membership "Inside Woody's World." This is his current focus and brings him great personal joy and satisfaction to see his members grow in their art. 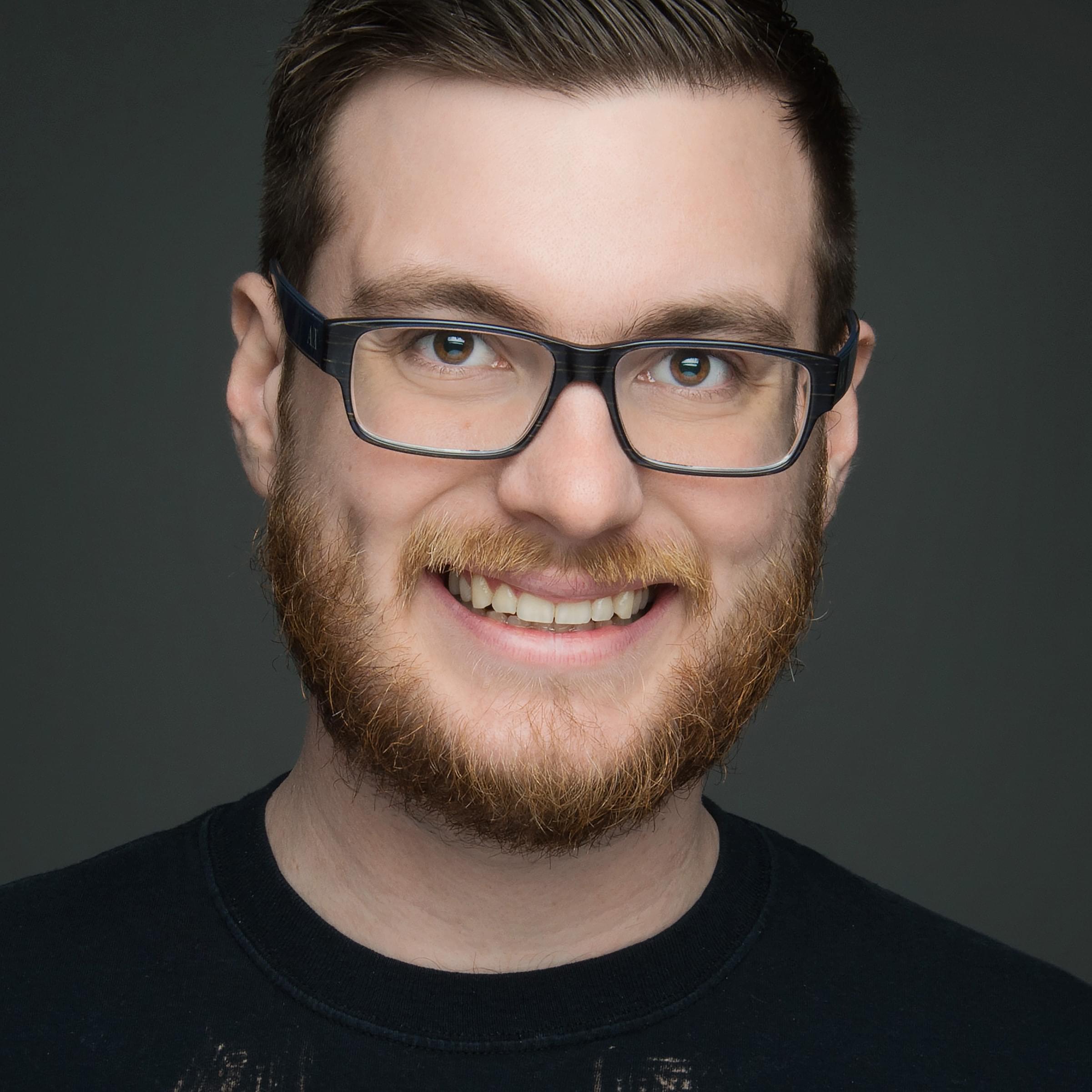 I've taken a lot of classes from a lot of sites and this is by far the most information and best how to videos I have used. The products are worth every penny I've paid and the membership is outstanding! So much information and Woody and Ninya are always so helpful! Love this group almost as much as my husband! LOL

I just joined about 3 weeks ago and am just getting into some of the lessons and tutorials, but I can already see where the information, training, freebies, discounts and feedback from the Facebook group will be invaluable to me as I grow my business. Don't get me wrong, it's not plug'n'play (I wish!), but it's led me to take my first steps into Photoshop - I was a diehard Lightroom user - and so far I haven't crashed and burned!
-Kim Booth

I must say that this has been the best $37.00 that I've invested. I was so impressed when I needed help with a photo...Woody Walters said "here's my number, give me a call and I'll help you"...Wow! That blew me away, he took the time to help me. The videos with the step by step instructions are wonderful. If you're like me and trying to start a photograpy business, this is the place you want to be! Being in this group, I thought at first it was going to be a little intimidating after seeing all of the wonderful photos. I've since thought, no I'm learning for some of the best photographers.
-Kim Green-Smoot

If it wasn't for Woody Walters I wouldn't be where I'm at today - making a lot of money! He has taught me so much about how to take my photographs to the next level and in today's world you need that. You have to be able to offer your clients something they can't get off their cell phones these days. The monthly fee is worth every penny just to be able to continue learning from this Photoshop Master. Trust me you won't be disappointed!
-Connie Fore

I would just like to make a comment or two on what I believe the benefits of joining Woody Walters secret group has done for me. First off I am a rank amateur. I don't know Photoshop that well but I can get my way around in it. Woody and Ninya with their how to videos make it so simple that when I did my first portrait of my grandkids using their methods my wife was simply amazed! She could not believe that I had done that and quite frankly I was kind of amazed myself. The cost of $37 per month is nothing in comparison to what you receive in instruction. I am about to retire from my job and I'm looking for something to do for additional income. I love pets and I love dogs. I'm thinking of going into business as a pet photographer. My neighbor has a beautiful dog and one day while my little buddy stood on his side of the electric fence I took some shots of him and then came in and followed the instruction provided in the Painted Pets Instant Paintings that I had purchased. I thought the neighbor lady might be at least appreciative of what I had done but she was elated with the outcome! She showed some her friends the picture of her dog's portrait to several of her friends and of those friends two called me to take pictures of their dogs and to produce similar results. Well not even technically in business yet the door opened wide. I could not have done this without what I've learned from joining Woody Walters Secret Group. To me it's like being back in school taking a course that I thoroughly enjoy. Thanks Woody and Ninya for the great instruction and the fellowship this group provides with people of similar interests.
-Craig Koepke

You are buying access to Inside Woody's World Secret Group.  While your subscription is in good standing you will remain a member of the Secret Group and have access to all the items listed above.

Cancel anytime you want, but it will remove access to the group and the resources within it.  It's recommended you download your products every month you are a member.

Allow 24 hours for your Secret 50% off pricing to be applied to your account after purchase, and your invitation to the secret group to be accepted.  Please send an email to help@templatephotoshop.com if you are experiencing any difficultly with any aspect of your subscription.  We are here to help!

Cancel anytime and Keep all the Member Downloads for the Month

All orders are through a very secure network. Your credit card information is never stored in any way. We respect your privacy...